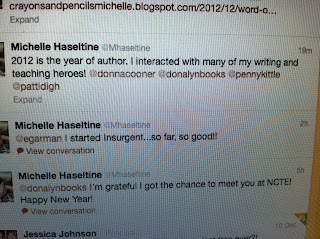 I just sent out this tweet about 2012 being the year of the author when I realized how true that is. In the tweet, I mentioned four authors...Donalyn Miller, Patti Pigh, Penny Kittle, and Donna Cooner...and then I realized that's only the beginning!!! I met Gary Schmidt, Marc Tyler Nobleman, Ralph Fletcher, Gretchen Barnebei, Georgia Heard, Chris Lehmann, Barry Lane, Charles R. Smith, Melinda Long and Jon Scieszka. (I also met Donalynn Miller and Penny Kittle.) That's a dozen...in 2012!!

That's not counting the authors I heard speak like Avi and Tom Romano and RJ Palacio and Katherine Marsh, Tom Angleberger and Susan Vaught. Being surrounded by authors is something that's been part of my life...in their books. To be able to meet them and listen to them speak and ask them questions...well, it's like someone who isn't a complete book nerd, going to Hollywood and meeting their favorite celebrity. I'd rather meet and talk with authors than everyone at the Oscars! Secretly...I have a confession...I want to be one of them...be part of their ranks. That's one of the reasons for my 2013 word. I've written a blog post for the Nerdy Book Club, which will appear in January. That's a start. Can I do this? Yes. I believe I can. Now, the work begins.

To all of the authors I've met and seen and admired and read...thank you! I continue to be in awe. Look for me...I'm on my way.
Posted by Michelle Haseltine at 8:18 PM